After reading my recent post about Christmas and the South End, a reader of my South End Patch blog asked “how did Castle Sq get its name? Was it named after something or someone?”

When I read the question yesterday afternoon, I had no idea why it was called Castle Square. The only thing I knew was that Castle Square Hotel and Castle Square Theatre were located on one corner of the intersection of Ferdinand (now Arlington), Tremont, West Castle (now Herald), and Chandler Streets. The hotel and the theatre stood on most of the Berkeley, Chandler, and Tremont Street block from the late nineteenth century until 1933, when they were demolished. The Chandler Inn is all that remains of the old complex. 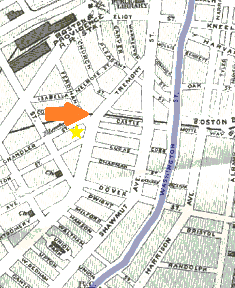 As most South Enders and Bostonians probably know, the intersection of East Berkeley (formerly Dover) and Washington Streets marks the approximate location of the narrowest part of the Boston Neck, the thin piece of land connecting Boston’s Shawmut Peninsula with the mainland. Early colonial Bostonians built fortifications on the Neck as early as the mid-seventeenth century. A map from 1775 shows a fortification on the Neck and a short street or path along its border labeled Castle Street. The Hale map from 1814 shows a Castle Street in the same location, near the edge of where the late eighteenth century fortification was located. The nineteenth and twentieth century pre-Herald street Castle Street sits along this same late eighteenth and early nineteenth century Castle Street.

I cannot be one hundred percent sure why early Bostonians named it Castle Street, but I think it may be because sometimes forts were described as castles. Castle Island (a.k.a. Fort Independence) is a good example. So it’s possible that the street took the name Castle Street because it was located along the line of a Boston Neck fortification and the name stuck all the way until the present day. If my speculation contains any truth, the name Castle Square is an interesting descendant of early Boston.