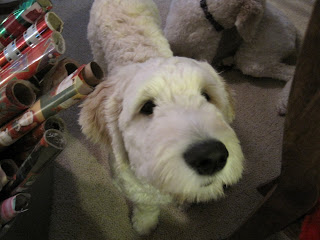 I’m sitting at my mom’s dining room table in my hometown of Lake Placid, NY, drinking a cup of coffee with eggnog. I’m surrounded by half-used rolls of wrapping paper, curling ribbon, and gift bows. We spent yesterday preparing for today- running last minute gift errands, cleaning, cooking, and wrapping a pile of presents. My mom made her traditional Christmas Eve supper-a giant pot of chicken and dumplings and homemade hot chocolate. The tree sits in the living room, the stockings hang from the windows, and the dogs Arlo (in the picture on the right) and Ayla (laying on the floor behind him) wait for the homemade biscuits they know await them. Later today when our extended family arrives, we’ll have a big turkey dinner, open presents, and maybe fall asleep in the wrapping paper like Randy from The Christmas Story. We do these same things every year. As I thought about the Christmases of my past, I wondered about those of others. How did past South Enders celebrate?

Many late 19th and 20th century South Enders lived in impoverished tenement districts. Charitable organizations attempted to give basic provisions to these penniless families, especially around Christmas time. For example, in 1902, the Volunteers of America provided baskets of food for 1,000 South Enders so they could prepare Christmas Day feasts for their families. Baskets included “roast beef or a turkey, potatoes, onions, squash, pie, fruit and nuts.” Volunteers also collected clothing to distribute to destitute families and sponsored a Christmas celebration for children complete with toys, “recitations, singing…moving pictures” candy and nuts.[1] 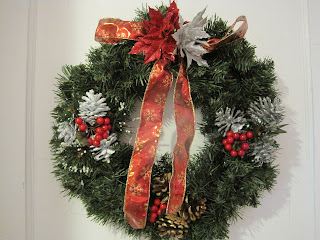 Numerous other organizations hosted parties for South End children. South End settlement houses like the South End House at 20 Union Park, the Lincoln House at 80 Emerald St., and the Hale House at 8 Garland St. hosted festivities lasting throughout the twelve days of Christmas.* In 1913, the Salvation Army held a party for 4,000 children at the People’s Palace on Washington Street in the South End. Boys received “sleds, hockey sticks, roller skates, and express wagons.” In 1936, 1000 South End children between the ages of 5 and 12 enjoyed a Christmas party at the Municipal Building on Shawmut Avenue with a “marionette show…featuring the ‘Adventures of Peter Rabbit’.”[2] In 1953, children at Hale House made gifts for loved ones. Especially popular were “smell bags…a sachet bag made of a bit of silk stuffed with cotton shavings and tied with ribbon,” usually given by children to their mothers.[3]

South End churches celebrated Christmas with sermons and seasonal decorations. In 1895, “the old, old story of Bethlehem was told” at the Church of the Unity on West Newton Street. Shawmut Congregational Church on the corner of West Brookline and Tremont Streets was “decorated with spruce trees, palms, lilies and other flowers, and wreaths of holly.” Warren Avenue Baptist (until recently Concord Baptist Church-photo at left from 1978) and Tremont Street Methodist (now New Hope Baptist) both featured “particularly good” Christmas music.[4] 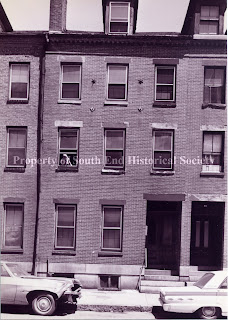 Occasionally however, tragedy struck the atmosphere of merriment. On Christmas Eve in 1890, a fire between Dover St., Albany St., Waltham St., and Harrison Ave. caused $150,000 in losses for the New England Piano Company, $40,000 in losses for Paul’s Block, took the life of an unidentified man, and injured two firemen. In late December 1979, a rooming house at 123 West Concord Street (at left, photo from 1972) burned partially, forcing out tenant Maurice LeVine. Maurice dressed up as Santa Claus for pay and had returned home early that morning from working at a Christmas party. After the fire he stayed in a room at the Bradford Hotel, carrying with him what he managed to grab during the fire- his fiddle and the Santa Claus suit he was wearing from the party. Not having anything else to do after the fire, he went around to Christmas parties in his smudged Santa suit, playing the fiddle and spreading Christmas cheer.

Whatever you celebrate, I hope you have a wonderful holiday!

*Emerald Street ran through what is now the Castle Square area. Garland Street ran between Shawmut and Washington Streets, about halfway in between the present day East Berkeley and Waterford Streets.

Images: The image of Concord Baptist Church and the image of 123 West Concord Street are courtesy of The South End Historical Society. The first two images belong to me.