In the 1950s, the city of Boston started to investigate the possibility of redeveloping certain neighborhoods that they believed were run down.  Several potential sites were located in the South End.  An urban renewal effort was going on throughout the United States and was encouraged by both the federal and local governments in many major cities.

The first area targeted for redevelopment in the South End was the neighborhood known as the New York Streets, the area between Harrison Ave., Albany Street, Dover (now East Berkeley) Street, and Motte (now Herald) Street.  The Boston Housing Authority (the predecessor to the Boston Redevelopment Authority) issued a report on the condition of the New York Streets in June, 1952:

“The most cursory inspection of the New York Streets establishes it as a blighted and  deteriorated neighborhood.  The streets [are] inadequate for the demands of modern traffic…The land is occupied by an indiscriminate mixture of commercial uses of every type…with slum residential properties, or housing that is well on the down grade.  The neighborhood is disfigured by…openly-dumped garbage and other filth since any vestige of pride in the surroundings has long since been abandoned by the people there…The dingy houses…reveal cracked masonry, rickety entrance halls and stairways, and dirty interiors with falling plaster….The dirty streets in the whole area swarm with children and adults too, on fair days, since the blessings of sun and light – even in the dusty gusts of air – are preferable to confinement in the squalid buildings.   Many of the businesses…are marginal in character.  Some of them include the storage [and] sale…of food items, despite the fact that the neighborhood is rat infested.” 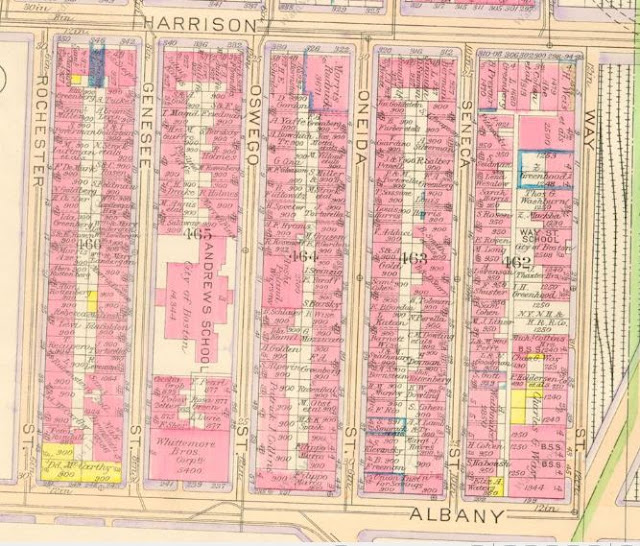 Hundreds of families lived in the New York Streets area, so called because the streets were named after places in New York State that a Boston railway line ran through: Troy, Rochester, Genesee, Oswego, Oneida, Seneca, and Rose (See Mark B.’s remark in the comment section below for detail about Rose Street).  Gloria Ganno, a former resident, recalled her time growing up in the New York Streets:

“When I was a child, automobile traffic was light, so neighborhood kids could easily roller skate on the street, play hopscotch on the sidewalk, and play baseball in three empty lots that at one time held three houses…On hot summer nights, we played “kick the can” and “hide and seek” in the dusk while our parents socialized on the stoops.
The Italian bakery next door…emitted the scrumptious aroma of bread and cookies baking…and we could rarely resist buying a loaf fresh from the oven. The bakery also sold cold cuts and had big wheels of cheeses imported from Italy.  On the next block was a Jewish bakery called Green Friedman’s, where we bought bagels and pumpernickel and rye breads also hot from the oven.  There were stores that sold fresh fruits and vegetables, meat and fish markets, and specialty stores catering to different ethnic groups….We never ate so well as when we lived in the New York streets.
During the mid-1950s, residents of the New York streets received a notice to move…[from] the Boston Housing Authority (BHA)…, Tillie sadly moved to Brookline. Although she was living in a more upscale place, she was lonely and missed her friends and her old neighborhood life. The elderly, the longest-time residents, seemed especially hit hard by the upheaval.”
The families who lived in the New York Streets were removed and rehoused, often in places far from the South End.  The city razed the area in 1955 to begin the first large scale urban renewal project in Boston (the West End followed soon after).  The Boston Herald building was built shortly afterward and occupies much of the site today.  The site will probably be redeveloped once more in the very near future.  The Ink Block project is investigating demolishing the Herald building, now vacant, and building mixed use commercial and residential buildings.
Other examples of urban renewal in the South End include Cathedral Housing, Castle Square, Tent City, the brick blocks, and Villa Victoria.

For Cathedral Housing, the BRA razed the existing structures on the site and built a housing development there in the 1950s to house WWII veterans and their families.  In the early 1960s, residents of the Castle Square neighborhood were evicted and their buildings destroyed.  Debates about proposed redevelopment for the area ensued and eventually an affordable housing block was built on the site.  The result, Castle Square apartments, still stands there today.

During this period, many South End residents feared that urban renewal would lead to higher property values and that the city was not guaranteeing enough affordable housing.  They feared that they would be pushed out of the South End.  Some organized and fought for affordable housing.  A famous example is Tent City, a housing development on the corner of Dartmouth Street and Columbus Avenue.  The city cleared the area of buildings in 1968 with the intention of constructing a parking garage.  Frustrated with the lack of assistance by the city for people being displaced by urban renewal projects and the lack of attention to the need for affordable housing in the South End, protestors occupied the lot, pitched tents, and camped there for three days.  The protestors won, but not without a long and drawn out battle.  The city did build affordable housing on the site and opened it…in 1988, twenty years after the initial protest.  But nonetheless, the building was christened Tent City in honor of the efforts there in 1968.

Affordable housing was also built in several other places.  Large brick buildings like Concord House and Methunion occupy long blocks on Washington Street, Columbus Avenue, and Tremont Street.  Another famous example of organized protest is Villa Victoria, which takes up several blocks around West Dedham St. and West Brookline St. in between Shawmut Ave. and Tremont St.  The city wanted to tear down the buildings and rehouse the tenants elsewhere.  The residents, a predominantly Puerto Rican population, organized in protest and fought and won the right to design a new housing development on the site.  Villa Victoria, an award-winning urban design, was the result.

What else was happening at this time?
The city of Boston wanted economic revitalization and encouraged new development throughout Boston, not just in the South End.  They approved the construction of the new Prudential Center and other new Back Bay buildings.  The South End’s proximity to downtown Boston and the Back Bay made it an attractive residential location for urban pioneers moving into the city in the early 1960s.  Urban renewal and economic revitalization led to rising property values, evident today in the city and in its immediate environs.
Where does the South End Historical Society (SEHS) come in?

The SEHS formed in 1966 to preserve the South End’s Victorian rowhouses and other historic architecture.  In 1972, the SEHS filed an application to place the South End district on the National Register of Historic Places.  They were successful.  The application included about 3,000 images of South End buildings, which the SEHS retains in its collections.