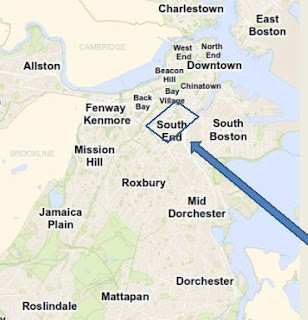 This post is adapted from lectures I gave in February 2012 at both the South End Historical Society and at the Old South Meeting House. 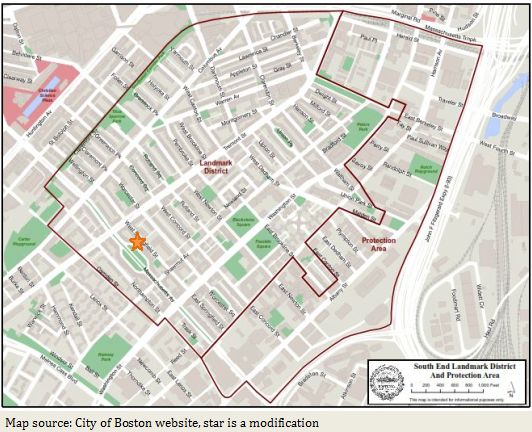 For those of you who might not be familiar with Boston’s South End neighborhood, you can see it in relation to the rest of the city on the map on the left.
The image below shows a closer view of the South End neighborhood.  This map shows the boundaries of the South End Landmark District, the area of the South End whose historic architecture is protected by the city of Boston.   The orange star marks the Historical Society office.
Until the early 19thcentury, the South End that we know today was a sort of no-man’s land between the main part of Boston on the Shawmut Peninsula and the town of Roxbury on the mainland.  The term “South End” referred to the southern part of town.  And the southernmost portion of Boston before the early to mid 19th century was the area of Franklin, Summer, and Milk Streets.  Hence the name Old South Meeting House, which today is smack in the middle of downtown.  So before the early 19th century, when the South End of today was mostly uninhabited, Bostonians referred to the South End as the area that encompasses today’s Financial District.  As we will see, as the city’s geographic boundaries changed, so did the idea of what area made up the South End. 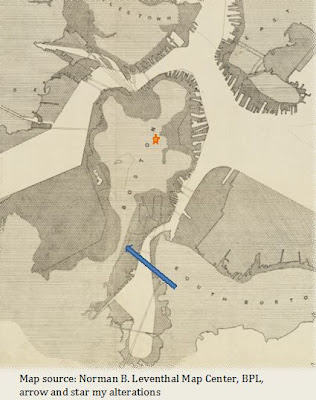 So when did the South End of today appear?  First, we need to understand a bit about Boston’s made land.  The Shawmut Peninsula (“original” Boston) was connected to the mainland and Roxbury by a long isthmus, the Neck, along which ran a main road, today’s Washington Street.  The map to the left depicts the original outline of Boston in light gray with a blue arrow indicating the location of the Neck.  The narrowest part of the neck, around the point where the blue arrow is, is where Washington and East Berkeley Streets intersect today.  The orange star marks the approximate location of the Faneuil Hall area.
In 1801, the town selectmen, including Charles Bulfinch, presented a plan to develop some of the necklands (in light gray near the blue arrow and to the South) between the main part of Boston and Roxbury.  The newly laid out area was mean to attract freestanding construction and houses surrounded by gardens and grounds.  However, few people purchased these lots and by the late 1820s, the city of Boston reevaluated the development of the Neck.  They planned more streets and divided the blocks into smaller parcels, hoping to attract a wider demographic with smaller and less expensive lot prices.  By the 1840s, as foreign immigration to Boston increased, the population of the city grew dramatically and tenement housing began to dominate.  The city worried that its middle and upper-middle class tax base would leave for the suburbs.  In the late 1840s, they decided to turn the necklands into a rowhouse district to entice these families to stay within the city limits.
At the same time, and in phases, the town (which became a city in 1822) began making land around the Neck to increase the available land mass.  The above map shows the original shorelines of Boston in light gray.  The dark gray indicates made land.  The land around the neck was filled first and then in 1857, the city continued to make land to the north of the South End, creating the Back Bay. 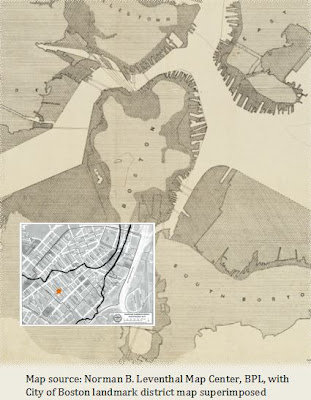 As people started to settle on the Neck and commercial enterprise took over much of the Milk, Franklin, Summer, and Devonshire Street area (today’s Financial District), Bostonians started to refer to the area of new development around the Neck as the South End because it became the most southerly neighborhood in Boston.  Remember that Roxbury was not annexed into Boston until 1868.  The map to the left shows the new South End in relation to the rest of the city.  This is the map of the landmark district that you saw above superimposed onto the map of Boston’s made land.  I drew the original shoreline of the neck on to the landmark district map to give you an idea of how much of the South End is built on made land.  As you can see, the Back Bay is almost entirely made land.  The orange star marks the Historical Society office.
Who lived in the new South End?  There was some settlement on the neck before the mid-19th century rowhouse era, although it was scattered.  Some early houses include the Porter Houses, the Allen House, and the Deacon House.  The Porter Houses were built on the corner of Washington Street and East Springfield Street in 1806.  The Allen House at Worcester Square and Washington Street was built in 1859.  Both the Porter Houses and the Allen House are condominium buildings today.  The Deacon House (image at left) was built in 1848, also on Washington Street, and no longer exists.  However, part of the rear wall of the house can be seen embedded in the building that stands at the site.
After the rowhouse plan took effect, the city laid out three residential style squares in 1850-1851: Chester Square (on Massachusetts Avenue today between Tremont St. and Shawmut Ave.), Worcester Square, and Union Park.  These squares feature rowhouses laid out around a central green space with a fountain.  Most of the buildings on these squares were built in the 1850s.  In general, upper-middle class families, many involved in commercial enterprise, lived in most of the houses on the squares.  Other South End streets were also developed into rowhouse streets, housing upper-middle and middle class families.  Working class families also lived in the district.  Their homes were usually on narrower streets located closer to downtown.
Coming soon: South End History, Part II: Boston’s Melting Pot.